Lewisham and the Web 2.0 world

Lewisham Heritage Team is pioneering the use of Web 2.0 technologies to help us reach out to users, and to make Lewisham's archives and historic material more widely available. As part of this we have created 2 wikis to provide information and collect contributions. 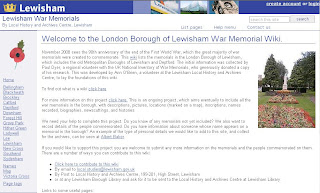 November 2008 saw the 90th anniversary of the end of the First World War, which the great majority of war memorials were created to commemorate. This wiki lists the memorials in the London Borough of Lewisham, which includes the old Metropolitan Boroughs of Lewisham and Deptford. The initial information was collected by Paul Dyer, a regional volunteer with the UK National Inventory of War Memorials, who generously donated a copy of his research. This was developed by Ann O’Brien, a volunteer at the Lewisham Local History and Archives Centre, to lay the foundations of this wiki.

Lewisham's Olympic Legacy
In September 2008 Lewisham participated in the handover of the Olympic flag from Beijing to London and we are now in the run up to the London 2012 Olympics. 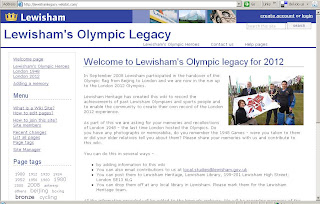 Lewisham Heritage created this wiki to record the achievements of past Lewisham Olympians and sports people and to enable the community to create their own record of the London 2012 experience. As part of this we are asking local people for their memories and recollections of London 1948 - the last time London hosted the Olympics. Do you have any photographs or memorabilia, do you remember the 1948 Games - were you taken to them or did your older relatives tell you about them? You can share your memories with us and contribute to this wiki.
Posted by Lewisham Information at 15:14