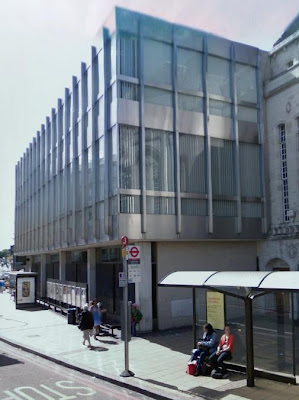 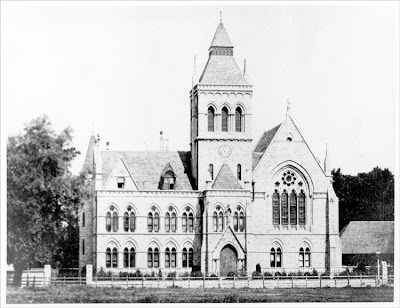 The Town Hall was joined in 1887 by Saint Laurence's Church (to the left of the Town Hall in the following picture). 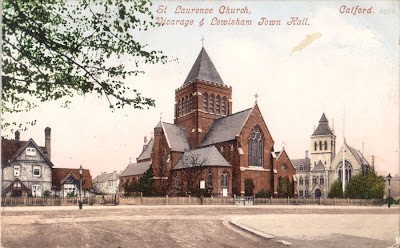 It actually ceased to be the Town Hall in 1932, when a new Town Hall building was officially opened by the Duke of York (Times, 23 June 1932). That building, which still stands as the Broadway Theatre, was designed to complement the old Town Hall, hence some of its gothic details.

The old Town Hall and the Church were both demolished in 1968, the former despite a campaign to save it that involved, among others, the poet John Betjeman:

'At the age of 13, William Norton, the son of a police sergeant and a Post Office worker, wrote to John Betjeman warning him of the impending destruction of Lewisham’s Victorian Gothic town hall. In no time Betjeman put William on to the recently founded Victorian Society, urged him to organise a petition, wrote him several long letters alerting him to other fine churches in Lewisham and Catford and then turned up at the town hall to be photographed with the boy. Despite all this, Lewisham town hall was demolished. It was still 1961, after all. England still slept. Betjeman at the same time was vainly battling to save the Euston Arch and the great glass rotunda of the Coal Exchange. Who else would have turned aside from those gruelling national campaigns to help an obscure schoolboy in one of London’s dimmest quarters to try and save a grimy town hall by George Elkington (no, I hadn’t heard of him either — his town hall in Bermondsey has been demolished too)? [Ferdinant Mount, Review of Betjeman: The Bonus of Laughter by Bevis Hillier, Spectator, 13 Novemeber 2004).

Betjeman spoke of the campaign in a television interview, and is pictured below with William Norton outside the Town Hall: 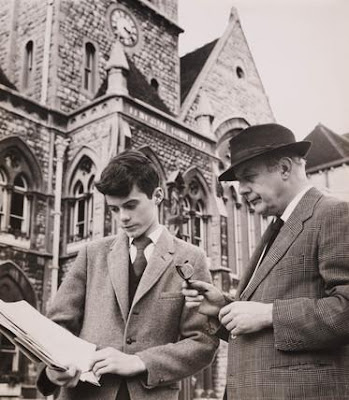 Wonder what William Norton did when he grew up? If you're out there Willliam, it would be interesting to hear your memories of that time.

While researching this post, I came across two local stories from the First World War, both rather sad and involving women workers in or around Lewisham Town Hall:

'Woman Omnibus Conductor Killed: Louisa Rushen, aged 22, a woman omnibus conductor, employed on one of the South London services, in walking round the front of her omnibus on Sunday night near the Lewisham Town Hall, was knocked down by a passing motor-car. Miss Rushen, whose home was at Fort Cottages, Westerham, Kent, died in the Miller Hospital’ (Times, 25 January 1916)

'German’s Daughter Sentenced: At Greenwich Police Court yesterday Emma Ada Clements, 23, clerk, was sentenced to six weeks’ imprisonment without hard labour for stealing a small sum of money from a cloak-room at Lewisham Town Hall, where she was employed as a temporary clerk. It was stated that her real names was Klemm, and that she was the daughter of an unnaturalized German, and that she had twice, when applying for work in Government departments, stated that her parents were British-born' (Times 29 November 1917).

Posted by Lewisham Information at 11:50