The significance of Deptford's dockyard basin

The significance of Deptford's dockyard basin:
Museum of London Archaeology has published brief information on its website about the continuing excavations at Convoys Wharf. The latest post focuses on the Dockyard Basin, one of the most important below-ground structures on the site which lacks any kind of statutory protection.


"The excavations... have unearthed several phases of the Dockyard Basin. This large pool probably began as a natural pond at the confluence of the River Thames with the small stream identified earlier in the excavation. Historical sources suggest that the basin was adapted to moor several of the King’s ships in the early 16th century and later used to season masts. By 1688, the Dockyard Basin (or ‘Wett Dock’) was hexagonal in plan, with slipways on the west side and a canal connecting it to the river. Once the ships were largely complete, they were launched into the basin to be fitted out.
"Excavations have identified a timber revetment wall that probably dates to the 18th century when the basin was remodelled. The revetment was held in place by large horizontal timber beams, called land ties, on the landward side. 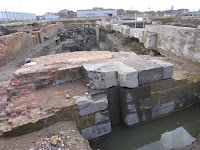 
The east wall to the canal linking the basin to the river, built in 1814 to John Rennie’s design. The recess to the right of the depth gauge would have housed an iron and timber gate. The wall replaced an earlier timber version, seen in the background of the image.
"The early 19th century saw a dramatic increase in the size of warships and the four slipways at the edge of the basin shown in the c1774 model had been replaced by two much larger stone slips by 1868. These stone slipways were protected from the weather by an open-sided cover building, now known as the Olympia building (listed Grade II). The cover building is one of only two structures visible above ground that date to the Dockyard period (the other being the Shipwright’s House outside the boundary of the site).
Posted by Lewisham Information at 11:20