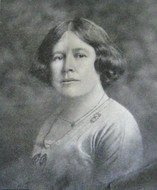 If ghosts should walk in Deptford, as very well they may,
A man might find the night there more stirring than the day,
Might meet a Russian Tsar there, or see in Spain's despite
Queen Bess ride down to Deptford to dub Sir Francis knight.

And loitering here and yonder, and jostling to and fro,
In every street and alley the sailor-folk would go,
All colours, creeds, and nations, in fashion old and new,
If ghosts should walk in Deptford, as like enough they do.

And there'd be some with pigtails, and some with buckled shoes,
And smocks and caps like pirates that sailors once did use,
And high sea-boots and oilskins and tarry dungaree,
And shoddy suits men sold them when they came fresh from sea.

And there'd be stout old skippers and mates of mighty hand,
And Chinks and swarthy Dagoes, and Yankees lean and tanned,
And many a hairy shellback burned black from Southern skies,
And brassbound young apprentice with boyhood's eager eyes,

And by the river reaches all silver to the moon
You'd hear the shipwrights' hammers beat out a phantom tune,
The caulkers' ghostly mallets rub-dub their faint tattoo —
If ghosts should walk in Deptford, as very like they do.

If ghosts should walk in Deptford, and ships return once more
To every well-known mooring and old familiar shore,
A sight it were to see there, of all fine sights there be,
The shadowy ships of Deptford come crowding in from sea.

The Baltic barque that foundered in last month’s North Sea gales,
And last year's lost Cape Horner on her sails,
Black tramp and stately liner should lie there side by side
Ay, all should berth together upon that silent tide.

In dock and pond and basin so close the keels should lie
Their hulls should hide the water, their masts make dark the sky,
And through their tangled rigging the netted stars should gleam
Like gold and silver fishes from some celestial stream.

And all their quivering royals and all their singing spars
Should send a ghostly music a-shivering to the stars —
A sound like Norway forests when wintry winds are high,
Or old dead seamen's shanties from great old days gone by, —

Till eastward over Limehouse, on river, dock and slum,
All shot with pearl and crimson the London dawn should come,
And fast at flash of sunrise, and swift at break of day,
The shadowy ships of Deptford should melt like mist away.

Cicely Fox Smith (1 February 1882—8 April 1954) was an English poet and writer. Born in Lymm, Cheshire and educated at Manchester High School for Girls she briefly lived in Canada, before returning to the United Kingdom shortly before the outbreak of World War 1. She settled in Hampshire and began writing poetry, often with a nautical theme. Smith wrote over 600 poems in her life, for a wide range of publications. In later life, she expanded her writing to a number of subjects, fiction and non-fiction. For her services to literature, the British Government awarded her a small pension. (Courtesy of Wikepedia)
Posted from Olddeptfordhistory.com

Posted by Lewisham Information at 17:12