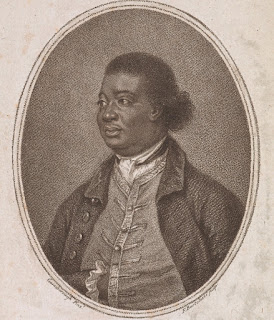 He was celebrated in the late 18th-century as a man of letters, a social reformer and an acute observer of English life. He gained fame in his time, and to eighteenth-century British abolitionists he became a symbol of the humanity of Africans and immorality of the slave trade.

Sancho grew up an orphan. At the age of two he was taken from West Africa to London where he was forced to work as a slave for three sisters at a house in Greenwich. During this time he met the 2nd Duke of Montagu, who lived in nearby Blackheath. He liked the young Ignatius and bought him books, and tried to persuade the sisters to educate him. After the duke’s death Sancho ran away from the house in Greenwich and persuaded the duke’s widow to employ him. Sancho worked in the Montagu household for the next 20 years, serving as Mary Montagu’s butler until the Duchess’s death in 1751, and then as valet to George Montagu, 1st Duke of Montagu, until 1773.

In 1758 Sancho married Anne Osborne, a West Indian woman with whom he had seven children. After Sancho left the Montagu household, the couple opened a grocery store in Westminster, where Sancho, by then a well-known cultural figure, maintained an active social and literary life until his death in 1780. As a financially independent male householder, Sancho became eligible to vote and did so in 1774 and again just before his death in 1780. He was the first person of African descent to vote in a British general election. He is also the first known person of African descent to have an obituary published in British newspapers.

After his death in 1782 Sancho’s letters were published as 'The Letters of the Late Ignatius Sancho, an African'. They contained reflections on slavery and empire, as well as his own vexed experiences as a highly educated person of African origin living in London. Sancho was an avid reader and pursued a self-taught education, taking full advantage of the libraries at the Montagu house, as well as its constant stream of highly cultured visitors. When Thomas Gainsborough visited to paint the portrait of the Duchess of Montagu, he also had Sancho sit for a portrait. As well as appearing on the stage, Sancho was particularly productive as a composer of music. He published four collections of compositions and a treatise entitled 'A Theory of Music'.