Reminiscence Sessions with Age Exchange.:  Find out more about the history of Deptford and surrounding areas at the Pepys Resource Centre from 12 p.m. to 1:30 pm every Thursday till 20th March.

Posted from Eco Libraries and Community Hubs
Posted by Lewisham Information at 12:03 No comments:

An Evening with the Merman

The talk should cover the Nunhead to Crystal Palace rail line, World War 2 bomb craters and some of the remains of houses that used to be on Sydenham Hill. Plus other items that Steve will produce on the day.

All are welcome. Well-behaved dogs are allowed to accompany the walk. Please wear appropriate walking shoes/clothes for (potentially) muddy/rainy conditions.

Posted by Lewisham Information at 11:59 No comments:

Dickens in New Cross and Nunhead

Dickens in New Cross and Nunhead:

Charles Dickens would have been 200 years old today, as he was born on the 7 February 1812. His connections with various parts of Southwark are well documented, but some of his activities in South East London in the later years of his life were rather secretive.

A number of biographies mention that during the 1860s he had rooms in New Cross which he used for writing and who knows what else. Jack Lindsay writes in 'Charles Dickens: a biographical and critical study' (1970): 'His habit of wandering round in strange places at strange times of the day or night went on; and he had a secret retreat in an apartment close to the “Five Bells” at the corner of Hatcham Park Road'. Ian Cunningham's 'A reader's guide to writers' London' (2001) states that he had a 'set of lodgings, opposite the Five Bells pub on the corner of New Cross Road and Hatcham Park Road, for some years as a place where he could work in peace'. The exact address isn't stated, but if it was directly opposite the Five Bells pub it would be this building at 157 New Cross Road, currently housing Winkworth estate agents. 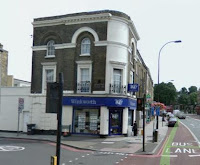 157 New Cross Road - did Dickens write some of
'Our Mutual Friend' here?

This would have been in the period when he was working on 'Our Mutual Friend' (1865), in which an area that is clearly New Cross is described as 'the flat country tending to the Thames, where Kent and Surrey meet, and where the railways still bestride the market gardens that will soon die under them'. In an 1868 letter, Dickens mentions that he will 'come to Gad's by some train from New Cross' (Gad's Hill Place was his home at Higham, near Rochester in Kent).

Dickens famously had a long term affair with the actress Ellen Ternan, the cause of his separation from his wife in 1858. In July 1868, Dickens rented a house for her, Windsor Lodge, in Linden Grove, Nunhead, where he was a frequent vistor. Indeed it has sometimes been conjectured that Dickens actually died there in 1870, but that his body was moved to Gad's Hill to avoid a scandal. The source of this story was evidently the caretaker at Linden Grove Congregational Church, opposite Windsor Lodge, but it is not generally accepted by biographers. It is discussed in detail in 'The Invisible Woman: The Story of Nelly Ternan and Charles Dickens' by Claire Tomalin who leaves open the possibility that he may have been taken ill in Nunhead and then returned to Gad's Hill to die.

The house no longers stands, but was at 31 Linden Grove. Old maps show that the church was next door to where the dental surgery now stands at 42 Linden Grove, so Windsor Lodge was presumably more or less opposite that.

Posted by Lewisham Information at 17:50 No comments: 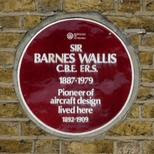 Posted from London Remembers
Posted by Lewisham Information at 09:57 No comments: