Open House London - what you can see in Lewisham

Open House London takes place on 21st and 22nd September, and this year there are 24 buildings and venues open for you to visit in Lewisham. These range from modern, contemporary buildings such as 22 Weardale Road and the Glassmill leisure centre to historic listed buildings such as Boone's Chapel and St Margaret's Church.

This year Convoys Wharf will also be open on Saturday from 11am to 4pm, with open access to the site of the proposed masterplan, an exhibition of the plan with architects and project consultants on site and a pop-up cafe.

Pick up a brochure from one of our libraries - available from next week - or check online at http://www.openhouselondon.org.uk/
Posted by Lewisham Information at 11:59 No comments: 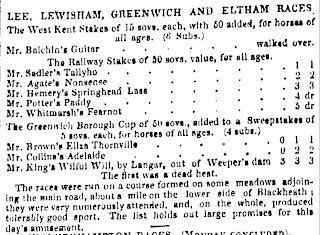 This comes from the sporting intelligence section of  The Morning Chronicle of 19th August 1836. One of the many newspapers that you can access on the 19th Century British Newspapers . This is one of the online resources available to all Lewisham Library Service members to use in a library or from home.

"Here then is Deptford ...." - Poem in Thankfull Sturdee's Reminiscences of Old Deptford

In 1895 Thankfull Sturdee published his Reminiscences of Old Deptford, a collection of 67 illustrations of the Deptford area reproduced from original art works and photographs. In the front he included a poem, but without any attribution. We'd like to find out who wrote it but haven't had any luck with our searches so far. If any one can help throw some light on this - please add your information below or email us at local.studies@lewisham.gov.uk 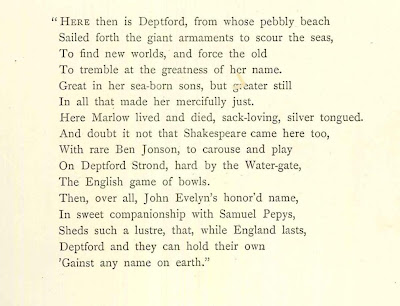 Posted by Lewisham Information at 14:38 No comments: