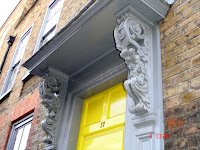 No. 37.
Old buildings in the neighbourhood with a romantic past such as Deptford’s are invariably associated with well known historical figures. It is reputed that Admiral Benbow lived at No. 20 Union Street, north side (Now number 37) and that Lord Nelson and Lady Hamilton spent some time at No. 19 (now number 34) the house built by Reyalls and Pearce. 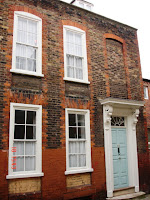 No. 34.
﻿It is unlikely that Admiral John Benbow who died in 1702 ever lived in Union Street. He leased Sayes Court in 1696 for 3 years from John Evelyn, but does not appear to have been there much. His son, John Benbow the Traveller, who died in Deptford in 1708 and in great poverty, might possibly have lived in Union Street. No evidence has been seen to prove or disprove that Lord Nelson stayed there. It is of greater significance that from the first, Union Street was inhabited by men connected with the Royal Navel Dockyard. Lucas’s will mentions houses occupied or in the possession of five sea captains and three shipwrights. Union Street must have been with these people, the most affluent in the parish, in mind. As the mortgage made with John Loving, the block maker, suggests, it was these people who provided some of the capital needed by Lucas. The rate books which go back to 1730 on the south side, and to 1750 on the north side of the street, show that this link with the dockyard was maintained until it closed in 1869. By the middle of the nineteenth century, there are signs that the occupants of some of the houses were of a lower social order. For instances No. 24 Union Street on the north side in 1851, was in multiple occupation, the heads of the three families being a labourer and two sawyers. But even then fourteen occupiers of thirty-two houses were craftsmen employed in the Royal Naval Dock Yard or were master mariners. Perhaps the most striking thing at that time was the number of private schools or academies flourishing in the street, which seem to have occupied no less than four houses. 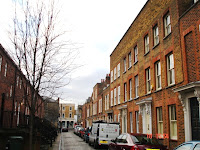 The last vacant site in Union Street was filled in 1838 when No.7 on the north side was built. Already, No. 21 on the same side had been pulled down and replaced by a pair of houses first rated in 1829, but by-and-large, Union Street remained intact until the end of the nineteenth century. In the last quarter of the century Lucas’s own house on the south east corner and No.2 on the south side were demolished and replaced by a single building facing the High Street, and the public house (King of Prussia) was rebuilt. In 1882, Union Street was renamed as a part of Creek Road and in 1898, became Albury Street loosing its anomalous numbering. The final re-naming of the street was necessitated by the re-aligning of Creek Road to join, at its west end, Evelyn Street, thereby at last obscuring the field pattern shown in the map of 1623, cutting off the north east corner of James Browne’s land. But even up the time of the Great War, Albury Street remained very much as Lucas left it. But by 1921, the south side had been broken and two large gaps appeared in the terrace in the middle and at the west end.

Since the Second World War these gaps have been made wider and recently they coalesced leaving just four houses of the original twenty-three. The north side has been luckier. A few houses at each end of the terrace on this side have be altered or rebuilt and since demolished, but a sizable number of the houses remain These houses are among the few survivors in the whole of London from the first two decades of the eighteenth century and although the gaps in their ranks are to be regretted, the four houses on the south side of the street and the longer series on the north must be seen as one of the most important treasures architecturally and historically among domestic buildings in London.
My thanks A Quiney for allowing me to reproduce his thesis on Union/Albury Street.

Posted by Lewisham Information at 11:32