In December 2011 we contacted Lewisham Arts Service to ask for their assistance in the potential restoration of the Love Over Gold mural on Creekside. Cockpit Arts inherited the mural (originally painted in 1989) when they bought the building but had had to replace the rotting wooden doors which contained the centrepiece of the mural in October 2011 (see previous post). Brigid Howarth (Lewisham's Creative Industries Officer) responded with the suggestion of a meeting in the new year, and last week she met with artist Gary Drostle, Becky Kingham (Cockpit Arts studio manager) and Sue Lawes (representing Crossfields) at Lewisham's Civic Suite.

As the artist originally commissioned to paint the mural, Gary Drostle had asked specialist paint manufacturers, Keim, to survey it and estimate the cost of its full restoration (Keim's paints were used in the original). They came back with a figure of £10.5K – a lot of money to find! Gary advised that splitting the work needing to be done into smaller segments over a period of time – as funds became available – would ultimately cost much more, but he estimated that the cost of simply reinstating the centrepiece of the mural on the new steel doors would be around £1000, since the same expensive paints would not be required for this.

Brigid explained that funds available to her to spend on public art were a miniscule £2000, but that the landmark mural was one that the borough was very proud of, and she was prepared to commit £500 seed money to help get renovation started. Becky Kingham kindly offered to match this amount with a further £500 from Cockpit Arts. It was decided that Gary be commissioned to put back the missing part of the mural on the new doors. 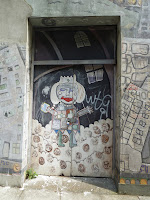 Another £9.5K needs to be found through voluntary fundraising efforts on the part of Crossfields and Cockpit Arts over the next 12 months, with initial help from Brigid to put together a funding package. At a time of continued budget cuts in the most needy areas, mural restoration may come bottom of the list, but we hope that there is enough community support to back up any approaches made to those organisations (such as local developers) who may have the spare cash to commit to such a project.

The London Mural Preservation Society has also contributed some helpful ideas for fundraising which we hope to follow up in the coming months. Work will not start on the doors until the Spring, but once restored, the meaning of the Love Over Gold mural will again be apparent.

Posted from Crosswhatfields
Posted by Lewisham Information at 13:27