Opening tomorrow at the Peckham Space presents 'The South London Black Music Archive, an exhibition by artist Barby Asante that aims to celebrate, preserve and investigate South Londoners’ personal relationships with moments in black music history. Peckham Space will be transformed into an ‘open archive’ mapping objects which represent and explore the personal stories which comprise the fascinating history of the influence and evolution of black music in South London. Welcoming contributions from the public, this archive will include items such as books, magazines, concert tickets, posters, stories, records and CDs gathered and displayed with the reverence of museum pieces. Asante’s selected objects highlighting seminal moments in this history will share the same platform as visitors’ objects and stories depicting their own experiences through music and memorabilia [all donated items are returnable at the end of the exhibition].

One of the founding items of the South London Black Music Archive will be a ‘limited edition’ vinyl specially produced for the project as a result of the artist’s collaboration with young people from the Leaders of Tomorrow (LOT) mentoring programme. This artwork was created in association with Regeneration & Community Partnerships, Tate Modern with an exclusive record sleeve by graphic design collective Åbäke. Copies will be available from record shops across South London and at Peckham Space for the duration of the exhibition. It will feature Asante’s own take on the BBC’s ‘inheritance tracks’ for which members of LOT were asked to contribute songs that inspire them. Songs chosen include tracks by Adele, Michael Jackson, Edvard Grieg, Nigerian singer Prince Nico Mbarga, Bob Dylan and Lauryn Hill which will be represented as a soundscape alongside recordings of the young people telling the stories and explaining their selections'.

Other events include artists’ talk on 3rd February, 18.45pm at Tate Modern; Daytime Disco 10 March 2011 at the Ritzy, Windrush Square, Brixton. Further details on the website or call 020 7358 9645 / email info@peckhamspace.com

As a starting point, there's this great map 'a growing record of black music landmarks in South London from venues and record shops to street corners and radio stations'. 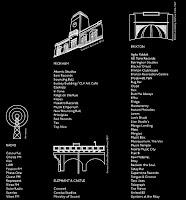 I've got a few ideas about some things I could contribute to this exhibition, and some places to add to the map. Among places featured previously at Transpontine there's:

Lots of other places too I haven't got round to writing about yet at Transpontine - the Lazerdrome in Peckham, Ram Jam in Brixton etc. Where else?
Posted from Transpontine

Posted by Lewisham Information at 10:20