'The Dewdrop Inn. Deptford. For all the old punks n freaks' is a great facebook groups with loads of photos of that pub from the 1980s and 1990s. The Dew Drop Inn was on the corner of Clifton Rise and Angus Street SE14 - sadly now converted to flats (I will do a post about it another time). As the pub faced on to Fordham Park it was the main drinking hole during the legendary Urban Free Festivals held in the park in the early 1990s, which attracted tens of thousands of people from all over London and beyond. I have taken some of the photos of the festival from the facebook group to give a flavour of it - hope nobody minds, this is priceless cultural history

The line up in 1992 included Back to the Planet, Brain of Morbius, The Seas, Sensor, Fat Dinosaur, Sidi Bou Said, Attila the Stockbroker, Moral Panic, The Rythmites, Levitation, Dr Phibes and the House of Wax Equations, RDF, Test Department, Co-Creators, Community Charge and many more. All this and the 'Free the Spirt Rave Big Top'. 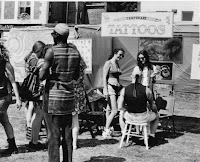 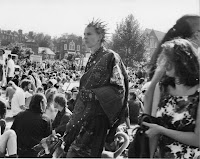 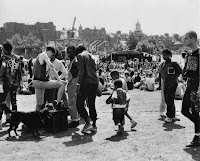 I believe these photos were taken by Seran Tahsin, who was not sure whether they are from 1991 to 1992. I think probably 1992, because there is a great bit of film footage from 1991 and the structures look a bit different.

I had some great times at those festivals will write some more about the later ones at some point. Any good memories or stories, leave a comment as always (and why was it the Deptford Urban Free Festival when it was plainly in New Cross?!)

Update: here's a couple of interviews with people remembering the festival (film was made by people from Deptford.TV Collective in 2007)

Posted from Transpontine
Posted by Lewisham Information at 16:08