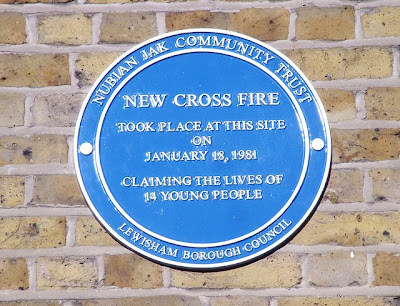 Earlier this year there was a series of events to mark the 30th anniversary of the 1981 New Cross Fire, when 13 young black people died in a fire at a birthday party (for background information see this earlier post).

Back in January there was a major commemorative evening at the Albany in Deptford, a church service, and the unveiling of a plaque at the scene of the fire (439 New Cross Road), attended by several hundered people.

Later this month, there's a launch coming up of the book The New Cross Massacre Story: interviews with John La Rose. The book was first published in 1984 by the Alliance of the Black Parents Movement, Black Youth Movement and Race Today Collective. John La Rose was the Chair of the New Cross Massacre Action Committee, which mobilised the black community in the aftermath of the fire. The reprint by New Beacon Books and the George Padmore Institute contains a new prologue by Linton Kwesi Johnson and an epilogue by Gus John that explore the significance of the period, the event and subsequent developments. LKJ is among those who still believe that the fire was caused by a racist attack (a view some of the victims' families now dispute) - he writes:

'The most significant date in the history of the black experience in Britain during the second half of the twentieth century is the year 1981. It began inauspiciously in the early hours of 18 January with a racist arson attack on a sixteenth birthday part in south-east London, which resulted in the deaths of thirteen young black people and twenty-six revellers suffering serious injuries. The response of the police, aided and abetted by sections of the media, with the implicit approval of the government, was to use their power to deny justice to the survivors of the fire, the bereaved and the dead. The shock, sorrow and outrage felt by black people throughout the country found expression in concrete political action. On 2nd March, some six weeks after the fire, the New Cross Massacre Action Committee, chaired by the late John La Rose, mobilised 20,000 people for a march through the streets of London. That Black People’s Day of Action was an unprecedented demonstration of black political power. It was a wake up call for the authorities, a watershed moment that signalled a paradigm shift in race relations in the UK. Moreover, with the Day of Action came a leap in Black British consciousness of the power to bring about change...

The New Cross area, in particular the London borough of Lewisham, was notorious as a hotbed of National Front activism and racist arson attacks. In 1977, the Moonshot, a black youth and community centre, was fire-bombed. That year Lewisham also witnessed street battles between National Front supporters on the one hand and anti-racists from the Anti-Nazi League, supported by black youths, on the other. In 1978, the Albany Theatre in Deptford was fire-bombed in a suspected racist attack, as was the Lewisham Way Centre in 1980. The New Cross fire was, therefore, not an isolated act of barbarism, but the latest and most devastating in a history of racist terror.

There were two inquests into the New Cross fire, both of which returned open verdicts. If the first, held with indecent haste just three months after the fire, was a travesty of justice where crucial evidence was suppressed by the coroner, then the second inquest, held in 2004, was a farce, as no new evidence was produced. However, on both occasions the police failed to convince the jury that the fire was the result of ‘black on black’ violence... ' 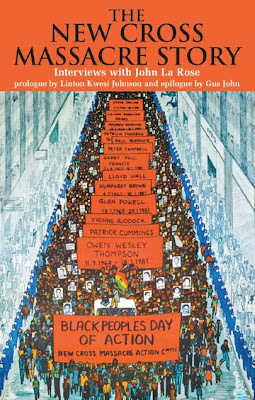 Posted by Lewisham Information at 14:22