Lewisham Natureman Mural:
I love this mural which popped up recently at the end of Cressingham road (SE13), by the railway bridge. Intriguingly it says underneath 'To the legend of the Lewisham Natureman'. Anyone know what that refers to? Nice little detail, there's a Lewisham crown logo at the bottom with a daisy growing out of it. 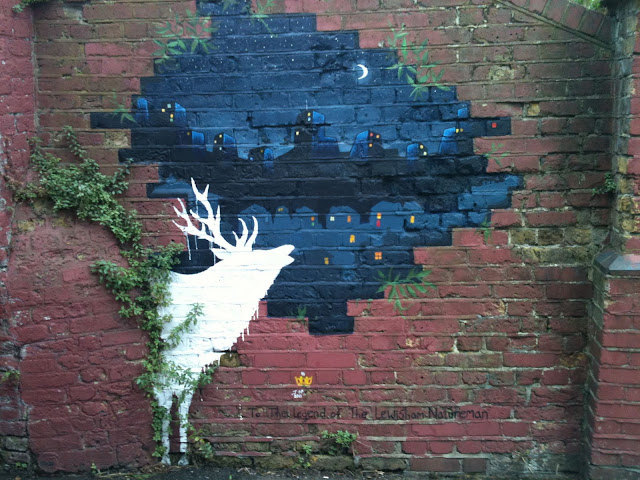 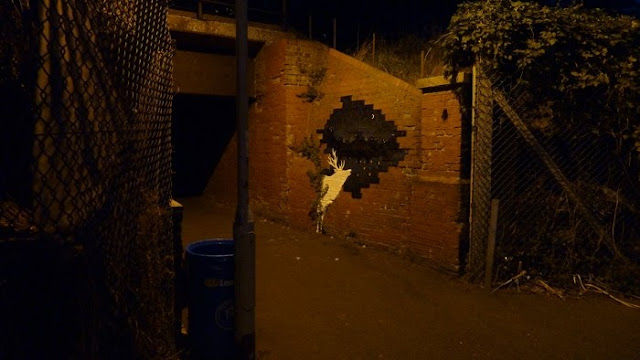 At his Wildcornerz site local artist and psychogeographer Jack Thurgar refers to 'The mysterious city explorer, specimen collector and shaman Solomon Wild... Both online and in real space i look for any trace of him. He is thought to be connected in some way to a strange old legend of 'The Lewisham Natureman', thought to have its roots in South East London's local graffiti scene. The Lewisham Natureman has never been seen and is only represented by a small carving, that can be found [normally hidden] in the wastelands, train sidings and rivers of the borough. This has given way to the belief that this character is not human at all but actually a spirit of the wild; a contemporary Green Man or Hern the Hunter, wandering in the wild, no-mans lands of south london. Some say Solomon is studying / hunting this legend, others say they are the same character'.

I suspect that Solomon Wild and the Lewisham Natureman are alter-egos springing from the artist's mythopoetic imagination (or shamanic journeying if you prefer), rather like Southwark's John Constable/John Crow. But that's all good. There's loads of interesting stuff at that Wildcornerz site, including films of wandering up the River Quaggy and this piece filmed on last June's Summer Solstice in wasteland off Baring Road, SE12:

Posted by Lewisham Information at 09:47