A death in the marshes

A death in the marshes:

'At daybreak on Saturday morning a boy employed to frighten crows from a cornfield discovered the body of a gentleman up to the waist in water in the marshes forming a portion of Woolwich Arsenal, The body was subsequently identified as that of Mr David Darling, a pensioned officer from the Royal Arsenal, of 7 Amersham Grove, New Cross. The deceased was last seen alive at the grave of his wife in Plumstead Churchyard, and it is conjectured that in walking through the marshes he was overtaken by the darkness and got into a bog from which he was unable to extricate himself' ('Lost in a Bog', The Times, 5 March 1877) 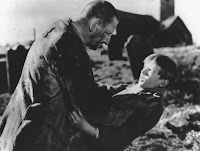 The elements of Kent marshes, a churchyard and a frightened boy put me in mind of a story written not long before, albeit set further out in North Kent (believed to be based on the marshes around Cooling, beyond Gravesend):

'Ours was the marsh country, down by the river, within, as the river wound, twenty miles of the sea. My first most vivid and broad impression of the identity of things, seems to me to have been gained on a memorable raw afternoon towards evening. At such a time I found out for certain, that this bleak place overgrown with nettles was the churchyard... and that the dark flat wilderness beyond the churchyard, intersected with dykes and mounds and gates, with scattered cattle feeding on it, was the marshes; and that the low leaden line beyond, was the river; and that the distant savage lair from which the wind was rushing, was the sea; and that the small bundle of shivers growing afraid of it all and beginning to cry, was Pip' (Charles Dickens, Great Expectations, 1861)

Posted by Lewisham Information at 11:38