Copperas Street is a topographical reminder of one element in Deptford's industrial past. Copperas manufacture began here in the seventeenth century and continued until 1828. Although now largely forgotten, the industry was once a highly significant one.
Copperas, or iron vitriol, is a ferrous sulphate. It was made from iron pyrites stone: not the shiny, 'fool's gold' form but heavy, dull black pebbles found in London clay and on Kent beaches. Once manufactured, Deptford copperas was used to make black and red dyes. (Other possible uses included production of sulphuric acid, or oil of vitriol, dye fixative, ink and gunpowder manufacture. It even became an ingredient of various patent medicines) 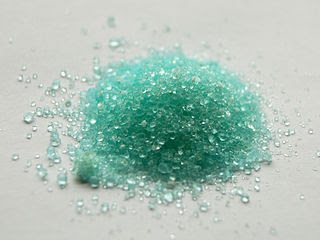 Sir Nicholas Crispe - whose main trade activities were in West Africa, and included the slave trade -established copperas manufacture in Deptford, off Church Street. The works had their own dock on Deptford Creek. An account given to the Royal Society in 1678 described the copperas bed as 'about an hundred feet long, fifteen feet broad at the top, and twelve feet deep, shelving all the way to the bottom.' The bed had clay and chalk at the bottom, with a wooden trough in the middle which led to a cistern. The iron pyrites stones were laid about two feet deep, then left to ripen for five or six years in the sun and rain before they began to produce a liquor of sufficient strength. New stones would be laid on top every four years to refresh the bed.
The liquor ran into a cistern which could hold seven hundred tons. The cistern was built from chalk-caulked oak boards; further boards sub-divided it to prevent leakage. Its liquid was pumped to a lead boiler some eight feet square where it was boiled with scrap iron for a week - thanks to improvements brought in by Crispe. Prior to his innovations, the process had taken about 20 days. This was expensive, as the fuel for this process was Newcastle coal.
Once sufficiently concentrated, the liquid was left in a cooler for a further two weeks for the crystals to form. Deptford's cooler was unusual in being made of tarras, a form of cement, rather than the more usual lead. It was twenty feet by nine feet, and five feet deep. The copperas would form five inches thick on the bottom and sides.
The copperas works are not simply a forgotten piece of local history or a byway of industrial history. Rather, researcher Tim Allen argues that they force us to reappraise the origins of the Industrial Revolution. Well before the development of the coal and steel industries in the north, these chemical works in London and on the Kent coast required capital investment and a long manufacturing process, and produced large returns. Copperas also contributed to many other industries, and was arguably a vital forebear of the modern chemical industry.
Image: Iron(II) sulfate [copperas], from Wikimedia Commons.

Posted by Lewisham Information at 13:28