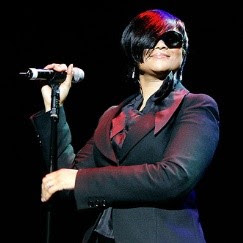 Louise Gabrielle Bobb (born 16 April 1970) known professionally as Gabrielle, is an British singer and songwriter. Gabrielle grew up in Brockley, the oldest of four children.


She released her debut single "Dreams" in 1993 which topped the UK Singles Chart the same year. Other singles include "Going Nowhere", "Give Me a Little More Time", "Walk On By" and "If You Ever" – a duet with East 17. After a few quiet years Gabrielle made a comeback with "Rise", which became Gabrielle's second UK number one in 2000. "Out of Reach" from the soundtrack to the film Bridget Jones's Diary reached number four in the UK Singles Chart.

Gabrielle won two Brit Awards for Best Newcomer in 1994, Best Female in 1997 and was also awarded an Ivor Novello in 2008 for Outstanding Song Collection.  Over the years she has also picked up two MOBO awards, including one at the very first awards in 1996. ''Under My Skin'' is her first album in 11 years. During her incredible career she has sold over 10 million records.
Local History and Archives Centre. Email:local.studies@lewisham.gov.uk

Posted by lewisham local history at 11:42